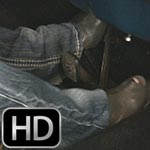 None of the cars enjoy the cold, damp weather but I think the Bug is the worst of them all.  Aubrey wants to try and get it running and after a lot of pumping, sputtering and coughing, the engine finally roars to life!  Aubrey revs it up for a few minutes, happy at her accomplishment!