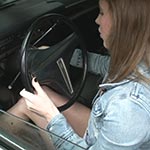 Aubrey Starts Up the Coronet in the Rain

The Coronet isn’t a big fan of rainy days.  Aubrey uncovers the car just enough so she can get in it.  She then starts working the process to get it started.  The car sputters at first and then fires up but when she’s seeing if it’ll idle on it’s own, it dies.

2 thoughts on “Aubrey Starts Up the Coronet in the Rain”