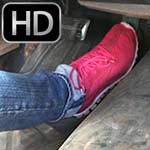 This was her first go at the old Camaro, which can be a handful if you’ve never driven something like it before. When you sit in it, you can’t see the end of the hood so you feel like you’re about to run into everything. It also isn’t a slacker. When you mash the gas, it wants to go!
She’s getting a feel for the car, working the pedals in her pink sneakers. I end up telling her after a bit that she’s driving like a grandma, which she then tries to prove me wrong by punching the gas and speeding around the roads. She’s still a little uneasy, mainly because she doesn’t know these curvy roads but considering she’s going from a Prius to a ’77 Camaro Z28, gotta give her credit!
She handles the car stalling and flooding out on her pretty well. She gets it fired up again and finishes the drive back home.

One Response to Autumn Fantasy Not Driving a Prius