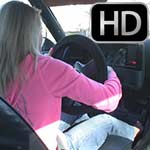 This custom video is of Barb taking the Monte Carlo for a drive but we all know that it’s never just an uneventful trip in the old Monte.  She’s wearing some brown leather thong sandals at first as she’s starting up the car.  It takes her some tries before it fires and stays running.  She uses the ‘two foot’ method of driving and after we’ve gone a bit down the road, she takes her sandals off while keeping the car moving.  She hits a side road to turn around and encounters a bit of trouble when the car stalls.  No biggie, she just works the process of getting the car started with her sexy petite feet with bright pink toenail polish.  She gets it started but stalls it at the stop sign, almost running out into traffic!  Again, she works it to get it going and heads back home, she’s had enough! lol

This was the very first video we did with her and didn’t give her any coaching at all.  She jumped right into this custom video without missing a beat!