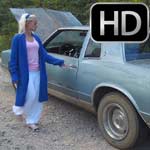 Barb Gets Stranded in the Monte Carlo – #362

Her day goes from bad to worse when she is supposed to meet a friend but ends up broke down on some old dirty road!