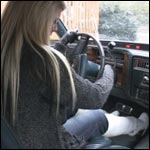 It was pretty darn cold when Barbie was last up to shoot and in this video, we’re going to take the Cadillac for a drive.  But since it hadn’t been moved all week, I was afraid the battery was dead.  Barbie gets in, turns the key and fortunately, the battery is good enough for this looooong battle showing Barbie trying her best to start the car.

One thought on “Barbie Cold Cranking the Caddy in Gloves & Boots”