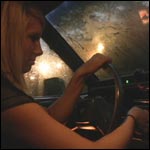 You convince Barbie to take her car tonight for your date.  It’s already dark out and it’s been raining off and on the whole day.  You watch her struggle to get her car started.  The car spins over slowly and catches a few times but stalls out.  The battery is getting weaker and weaker with each attempt.  She finally has enough and says that we’re going in my car.