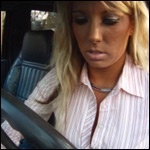 Barbie tries starting the old Blazer in some cowgirl boots, booty shorts and a tied-up button down shirt.  3 different cameras capture her ordeal as she tries getting the car started before the battery dies.