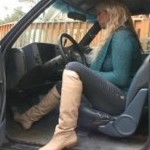 Barbie Cranks & Drains the Battery in the Blazer & Volvo, 2 of 2

With the Blazer failing her before, Barbie scurries to the Volvo in hopes she has better luck with it.  The gas pedal is broke off still in the Volvo, so she has to pump the rod that used to hold the gas pedal on it.  The Volvo sputters and coughs a lot but she does manage to get it running.  It still sounds rough and she tries feather the gas a bit to clear it out but it ends up stalling again.  She pumps it a few times before cranking it but never gets it to run again.  The battery gets drained in this car too and now she’s got both ends of her driveway blocked with dead cars.

2 thoughts on “Barbie Cranks & Drains the Battery in the Blazer & Volvo, 2 of 2”