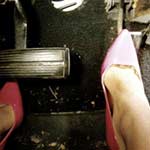 Barbie Driving the Coronet at Night in Pink Stilettos, 1 of 2

Making a food run after shooting most of the videos for the day and I decided to try some night filming.  I put in some lights and recorded her driving to town and back.  The footage is so-so and the light I put above her was shining in her eyes and reflecting too much in the windshield, so it made it hard for her to see which made her driving very slow and cautious.  But maybe there is some enjoyment to be had from the outfit and the picture-in-picture shot of her pink stilettos working the pedals. 🙂

One thought on “Barbie Driving the Coronet at Night in Pink Stilettos, 1 of 2”