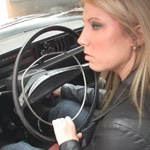 Barbie Struggles with the Volvo in Leather Boots

Today is one of those days where the Volvo acts like a 2 year old throwing an epic temper tantrum.  Barbie tries pumping it in different ways to see if the car will respond and it just isn’t working.  Her frustration is building as the car just keeps giving her the middle finger but when she least expects it, the car sputters and comes to life but it’s running terrible!  It sounds like it could die any second but she keeps revving the engine, trying to clear it out and hope it stays running.  The video finishes with Barbie revving the motor with that relieved look on her face.

**Use Windows Media Player for this clip, it’s one of them odd anti-VLC clips.**

2 thoughts on “Barbie Struggles with the Volvo in Leather Boots”