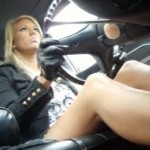 Barbie Driving the Coronet in Ankle Strap Pumps, 1 of 2

Barbie has her driving gloves on and ready for a cold day of driving the Coronet.  It takes her a bit to get the Coronet running but she manages and revs it slightly to warm the motor up before taking off.  The car does stall on her while out but she recovers nicely.  This first clip is filmed looking up at her as if you’re a little bug in the floor board.  You get to see her long, bare legs working the pedals and her gloves grabbing the steering wheel and ignition.

10 thoughts on “Barbie Driving the Coronet in Ankle Strap Pumps, 1 of 2”