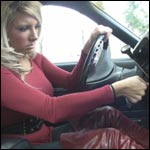 Barbie Cold Starts the Coronet & Goes for a Drive, 3 of 3

This last clip is mostly leg shots, capturing those super sexy red thigh high boots working the gas and brake pedals.  She’s driving down the road now that the car is warmed up but she quickly discovers that it’s not running entirely smooth.  It stalls out a few times but thankfully there isn’t much traffic on this back road.

One thought on “Barbie Cold Starts the Coronet & Goes for a Drive, 3 of 3”