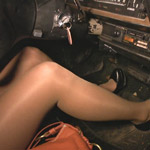 We’re back in the passenger seat as Barbie is driving this evening wearing some sheer pantyhose, platform stiletto pumps and a sexy black dress.  In this clip, she immediately slips off her shoes and starts flooring the gas as much as she can.  She has to floor it with her toes, stretching her feet and legs out so you get a nice view of her long, toned legs wrapped in some shiny nylons!  There is a lot of foot action between the gas and brake pedals.  She eventually pulls into a parking lot and teases you with some sexy revving and flooded cranking!  Once she’s gotten you all worked up, she drives you home. 🙂

**If you have issues playing this in VLC, it seems to work better with Windows Media Player.**

3 thoughts on “Barbie’s Pantyhose Delight, 2 of 2”