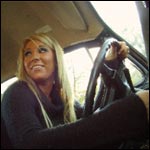 Trying to Go Out with Barbie in the Bug, 2 of 2

So we’ve left the Bug and now she’s heading to the Volvo while I was about to go inside. She wants to see if the Volvo will start and I give her some crap about it when she’s not able to get it started. LOTS of dialogue between us as this request is supposed to be filmed like a hidden-camera and very casual. She tries for this entire clip to get the Volvo cranked but no luck.

One thought on “Trying to Go Out with Barbie in the Bug, 2 of 2”