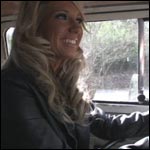 Barbie Does Some Warm-Up Revving the Bus in Boots

We hadn’t had the Bus very long when Barbie stopped by for a shoot.  It was cold out and I wanted her to hop in, start it up and get the engine warmed up a bit.  She’s wearing some really tall red suede boots with some tight-n-shiny leggings.  You get a good close up of her boots on the gas, massaging it up and down to keep the rpm’s up.  She even sits in the back of the Bus for a bit to check it out and see how roomy it is.  Enjoy this super sexy and curvacious blonde playing in the at-the-time new toy! 🙂