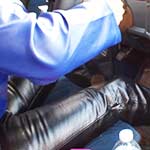 She finishes up the drive, for the most part and as she’s just about to turn into the driveway, a damn dog decides to block the road. He is running away from her and it’s probably a good thing she was already slowing down because that could have been bad…damn dog!! Anyways, that steep incline up the drive is one of those spots where the cars stall very often. Sure enough, it stalls out on her as she makes the turn and to not roll back into the road, she stomps hard on the brake. She jams the gear selector into ‘Park’ and starts cranking the engine again. It takes her a while to get it unflooded and running good enough to head up the driveway some more but stalls it out again near the top. By now, she’s frustrated at the car and you get some good, hard pumping for the rest of the clip as Brandi fights with the car to get it parked.

One thought on “Brandi Leather Pants, Jacket & Boots Pumps the Monte, 2 of 2”