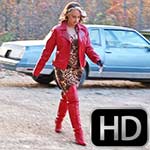 Brandi Cranking & Revving the Chevy’s “I Love the 80’s”

She’s got this 80’s rocker chick look going on with her red leather jacket, leopard print dress and red leather thigh high boots on. It goes perfect with the old cars! 🙂 She’s going to park the cars but as you all know, that’s never as easy as it sounds.
She starts with the Monte Carlo first and then when she gets it moved, she gets in the Camaro. She has to fight with both cars before being able to rev it up and move it. When she finishes with the Camaro, she sees that look that you want more and the video fades out with her romping on the gas pedal!