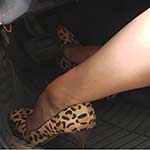 We debut Brianna in the ever-so-temperamental Monte Carlo.  I told her the car talks back and to not be afraid to give it some gas.  She took that to heart as she pumps the gas pedal about half a dozen times or so before she turns the key.  She pumps in a way that gives you foot arch fans something to write home about as her arch pokes out of her sexy leopard print pumps.  She keeps spinning the engine over, working the process and does manage to get it running.  She then does some good warm up revving.  You get a good dose of toe cleavage as well. 🙂