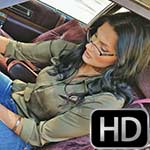 You’re in the passenger seat and heading out with Britney but she can’t get her car started. She’s kills the battery completely, even holding out hope until the very last ‘click’…such an optimist! lol So you have to swap out batteries for her and let her give it a go. You’re standing outside now looking in through the open drivers door with her looking up at you with that bummed defeated look when she asks if you fixed it? She starts cranking the car again, softly pumping the gas as to not make it more flooded than what it is. The car isn’t showing any signs of starting, which isn’t good for her. She keeps cranking the car until she kills this battery also.
**the seat in the Caddy doesn’t move, so that’s why she looks so close to the steering wheel with her super long legs**