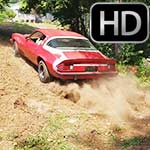 Britney a Little Stuck in the Camaro in Keds

Britney and Sasha went to get the Camaro and it proved to be a little tricky getting it out from the backyard where it was parked. She walks to the car as Sasha films, gets in and fires it up after pumping the gas 5-6 times with her sneakers. From there, she starts backing up to turn around but always seems to find her wheels spinning no matter which direction she goes. Sasha is filming entirely from outside the car while Britney keeps kicking up dust.