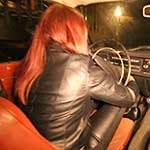 The video opens with a view from the deck looking down at the old VW Bug with Britney trying to get it started as Cassandra watches. The battery is weak and dying, so it looks like they’ve been at it a while. Diana comes out of the house and hears the car not starting.
“What the hell are yall doing?!” Diana says. Last thing she knew was that Britney and Cassandra were going out to get the car started while she finished getting ready. “That was 15 minutes ago!” Diana reminds them.
When Diana gets to the Bug, she tells them to move so she can try it. Unfortunately, her luck is no better so she suggest they take the Volvo.
Yeah, things only get worse from there….

One thought on “Britney, Cassandra & Diana Clunker Crisis at Night, 1 of 3”