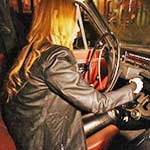 Part 2 continues with Britney cranking the Volvo and telling the girls not to worry…not to worry. Except she’s not getting it started so time for Cassandra to try it. She gets behind the wheel, aggressively pumps the pedal and cranks the car over and over and over again. She’s having better luck because the car sputters and runs a little but keeps stalling. To hell with the Volvo, time to try another car…the Camaro!
Diana starts off but has the same luck as the Volvo, none! The video comes to and end when Diana gives up the seat to Britney who looks enthusiastic and confident that she’ll get it started. We’ll see in the next clip.

One thought on “Britney, Cassandra & Diana Clunker Crisis at Night, 2 of 3”