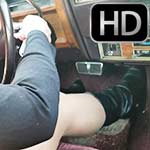 “Shish makes us do his dirty work!” Diana moans as she and Britney look at the Cadillac parked in the yard. Well, it wasn’t ‘parked’ intentionally there…it’s stuck. They tried getting it unstuck the other day but the ground was too wet, so they left it there and thought they might have some better luck after it dried some.
Britney carefully walks to the drivers door, opens it and gets in while Diana films herself getting in the passenger side. Both girls are wearing black dress, sheer pantyhose and boots. They get situated and Britney goes to start the car up and yay, it fires up easily and she puts it in ‘R’ and steps on the gas…*poof*…the engine snuffs out. She fires it up again and steps on the gas and is able to get some movement going. Diana gives her some tips as she’s been in this situation before — “Rock it some.” she tells Britney. Britney tries to get some rocking motion going and just when it’s working the car does it *poof* and dies again. The engine is still cold and being that aggressive that early has now made it really hard to start. The exhaust is puffing out white smoke as Britney is spinning the engine over.  After a while with no luck, Diana swaps with Britney to see if she can get the car started again and out of the mud…does she succeed?
**This is the stream of just the girls point-of-view.**