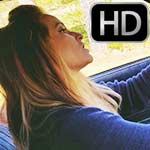 A mega-series of these 3 hotties cranking, revving and driving a whole bunch of our cars. I think every car gets pumped in this series except the VW’s and the Renault.
This first clip is just them trying to get their adventure started, quite literally. The Monte Carlo isn’t wanting to start for Jane while her and Britney wait for Diana. She’s getting really frustrated because it’s not even hinting at starting. Diana finally shows up and just waits for Jane to get the car started like Britney is. The battery is getting weak and before it dies, Diana wants a crack at it. So she slides over while Jane films from outside the car by the drivers door while Diana tries, unsuccessfully, to get the car started before the battery dies.