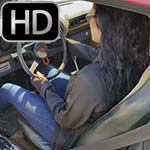 So the battery is dead, Jane killed it trying to get the Monte Carlo cranked up in the first clip. So she changes the battery and Diana gets first crack at getting it started with the fresh battery and voila! It fires up! She revs it some to make sure it’ll stay running and then drives down the street so they can get some of the other cars fired up.
Britney heads to the Camaro and struggles to get it started.
Diana heads to the Cadillac and has her own issues getting that land barge going.