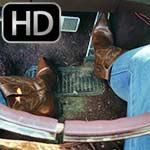 Part 4 spends a majority of the time with Diana as she’s battling with the Cadillac trying to get it started. I know we saw her drive the old Bug yesterday but I don’t think there’s such a thing as ‘too much Diana’ around here! 🙂
The last part of the video then shows Jane trying to get the Camaro started (after it had been sitting) in some white Adidas sneakers with Diana critiquing her from the deck and wearing some overknee boots.