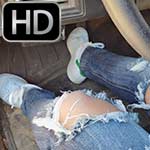 Jane is struggling still with the old Camaro, trying to get that baby started up in her white leather Adidas sneakers and torn jeans. You’re watching from her point-of-view as she’s begging the car to start and getting close but can’t clear it out enough to run smooth and idle. Diana, being the pro she ‘thinks’ she is, ends up swapping with her to give her pedal pumping skills a test. She’s got on a pair of thigh high cowgirl boots over some jeans to pump the gas pedal with. She works it for a while, getting close like Jane was but not able to get it to fire up. Britney shows up to the party, wondering if either girl is going to get the car started when finally, Diana gets it to startup!
“Get in bitches!” she tells the other two and they pile in and drive down the street to change some batteries in cars.