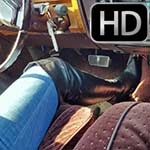 This last clip of this series finishes out with Diana & Britney swapping seats in the Cadillac. Britney is now driving and starts heading back from the area they were exploring. When they get part of the way back, they swap again and Diana drives them back to the house where Britney ends the video doing some revving of the Cadillac and looking back with the door open. You know, gotta end this series with a nice shot of a rear end. 🙂