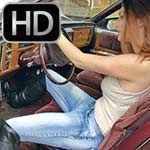 Britney, Jane & Sasha Crank the Cadillac in Boots, 1 of 2

The girls are going to go do a little shopping on a rainy day. Simple, right? Not when you’ve got a clunker like the Cadillac as your ride. Sasha spends this entire first clip trying to get the car started while Britney & Jane…where are Britney & Jane??
Anyways, Sasha is battling the Cadillac alone and goes through a few batteries in the process. It sputters and chugs but she probably just flooded it. She’s gonna go see if one them can start the car instead.

One thought on “Britney, Jane & Sasha Crank the Cadillac in Boots, 1 of 2”