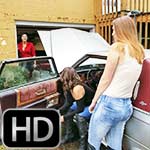 Britney, Jane & Sasha Crank the Cadillac in Boots, 2 of 2

Britney and Jane are at the bar drinking tea as Sasha comes in and tells them the issues she’s having with the Cadillac. She needs help getting it started and Jane heads out to see if she can help.
Jane gets behind the wheel while Sasha leans in through the open drivers door and says, “Show me how it’s done.” It’s being stubborn and Jane is getting it to sputter but it’s really really flooded! A full side view of the car shows some exhaust coming from the tailpipe as Jane cranks it. The battery is getting weaker and weaker and they decide to give the car a break.
Now Britney has made her way outside, wondering what is going on and finds Jane and Sasha sitting there giving the car a break. So Britney decides to give it a try but after some struggling herself, she gives the seat up to Jane who finally gets the old land barge running! Thick white smoke billows out the tailpipe with each rev and that belt squeals for attention or replacing.
Now they can head out.

One thought on “Britney, Jane & Sasha Crank the Cadillac in Boots, 2 of 2”