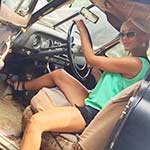 This is her first attempt at trying to get this car started. It needs the charger since it’s been sitting for a bit and when she starts cranking it over you can see all the dust and dirt go flying everywhere. She drains the battery and has to get out and check the charger to make sure it’s still working…yup, it’s working and she lets it charge for a while before trying again. She films from her point-of-view first when she gets back in the car and then changes to a passenger side shot to view her full body as she keeps cranking and draining the battery. Well, it doesn’t look like it’s going to start today.

One thought on “Brooke Cranking the ’51 Chevy in Strappy Heels, First Try”