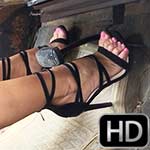 Well, still fighting with the old battery and that old engine in some sexy thin-strap stilettos and shorts.