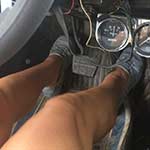 Ugh, the battery is dead! She gets out and connects the charger to it so she can try to get it cranked up and running. It takes multiple charge cycles to get it running but she finally does it.

One thought on “Brooke Cranking & Charging the Nova in Gray Sneakers”