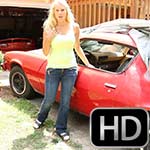 Brooke is trying to sell the Camaro and you’re a potential buyer.  She starts telling you about the car and you ask if she can start it up for you.  She gets in and because it hasn’t been ran much lately, it’s very hard to start.  She’s trying to convince you it’s normal and it runs good once going but you’re just focused on her sandals and socks pumping the gas pedal! 🙂
**Sorry for the over-exposure on this video, we were still learning this new camera**