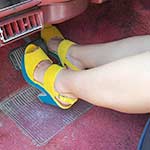 She puts on these block-heeled yellow & aqua sandals before firing up the Jeep and revving the shit out of it a few times before the fuel pump says ‘no mas!’ She cranks the engine over and gets a sputter or two but for the most part, it’s just dry cranking and not sounding like it wants to start. It’s hard to tell if it’s flooded or just the fuel pump acting up now.
After a bit, she gets it fired up and goes to revving it hard but it stalls out again. She moves her left foot closer to the seat and that causes her knee to raise which forces her dress to slide up her leg some more, revealing more of her tanned and toned left leg. She gets it started again and the video ends with her revving the engine.