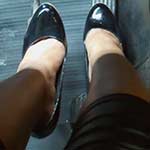 We’re just taking the Volvo out for a cruise.  Little did we know that it would be full of adventurous stalling and window handle breakage!!  Lol!  This is why we can’t have nice things here at PTP.  These girls always breaking stuffs!