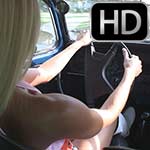 This is the first time Brooke ever drove the old Super Beetle. Needless to say, it’s a pretty wild ride! She was in a rush to slip this costume on that she didn’t realize she was wearing two different kinds of boots. In fact, none of us realized until she came back for a second shoot and we were looking through these pics! Some hard driving, stalling, hard time finding gears, revving and lots of ‘oh shit’ moments! 🙂

One thought on “Brooke Mod Squad Costume Cruising in the Bug”