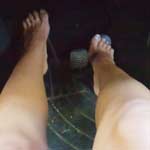 Brooke Wants You to Watch Her Crank & Drive

Brooke wants you to come watch her start her car.  She jingles the keys as she gives you that sweet look which you can not possibly say ‘No’ to her.  She cheerily scurries to her car as you follow her, checking her out from behind and seeing her sexy bare feet.  She climbs in the old 72 Super Beetle and tries getting it started.  Her legs are stretched out to push the clutch in and pump the gas pedal and you get a great view of her gorgeous, toned legs.  She doesn’t think it’s going to start but she manages to get it fired up and warms up.  As she’s pulling out of the parking spot, the Bug dies on her and you get to now watch from the passenger side as she pumps and pumps and pumps on the gas pedal, bouncing in her seat and filling the air up with that sweet smell of gasoline from a flooded engine.  After some work, she gets it cleared out and the rest of the video is of her driving the Bug around on the backroads.  She’s working those pedals good as she floors the Bug and jams on the brakes often.

4 thoughts on “Brooke Wants You to Watch Her Crank & Drive”