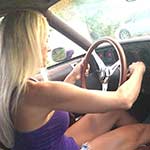 She’s trying to take it out for a little joy-ride but it was smoking earlier from when her and her sister were playing around in it and now it’s being stubborn.  She’s able to rev it up when it starts but when this engine is hot, it floods out easy if you don’t two-foot it just right when it gets near idle. Sometimes she has fun making it a challenge to start but then when she wants it to start, it doesn’t. She finally just leaves it where it is because she can’t keep it running.