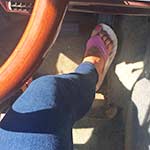 Brooke Taking the Laguna Out & Needs a Jump, 1 of 2

The garage door is closing in the background, she’s got her cute lil pink hat on to match her pink flip flops and she’s ready to roll! She gets the Laguna fired up, puts it in gear, pulls out of her drive way and….the car stalls…aaaand she kills the battery. Shit! She needs a jump start. She gets some assistance to get her car started again and revs it up before trying to go anywhere again. This old cars sounds badass but doesn’t like to idle.

One thought on “Brooke Taking the Laguna Out & Needs a Jump, 1 of 2”