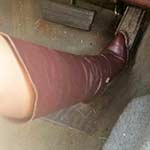 Brooke Takes the 1976 Laguna on a Gas Run

The old Laguna needs some gas so she can do some more videos! She walks out to the car, struggles with it a bit but manages to get it fired up. She drives to the gas station kinda easy because she’s still getting a feel for the car. The car has a fuel cell instead of a normal gas tank, so she pops the trunk lid to gain access to it. She throws some fuel in the cell, closes the lid and pumps the gas to get the car started gain and now she can go play some more…but that’s in other videos.