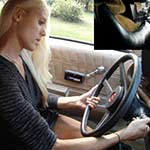 Brooke Starts, Stalls & Drives the Camaro in OTK Boots, 2 of 2

Rolling along with Brooke, listening to the sound of the Camaro rumbling off the hills and houses we go by.  All is good until we hit a stop sign where the car chugs out and dies.  She can’t get it started right away and a car comes up behind us.  She tries waving them around but the person is not paying attention.  Brooke starts laughing at her embarrassing situation and just as the car is starting to go around us, she gets the Camaro started and takes off!

One thought on “Brooke Starts, Stalls & Drives the Camaro in OTK Boots, 2 of 2”