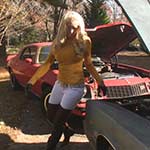 Brooke is wearing some killer Fernando Berlin thigh high boots with a pair of tight white pants, a yellow sweater and some sexy black leather half-gloves.  She tries starting the Camaro first but the battery dies and she then goes to get the Monte Carlo to jump off the Camaro.

One thought on “Brooke Starts, Revs & Jump Starts Some Cars, 1 of 3”