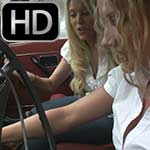 Brooke & Gem Crank the Volvo on a Rainy Day

Gem can’t drive a stick shift so Brooke decides to give her a few lessons…Stick Shift: 101, Getting it Started.