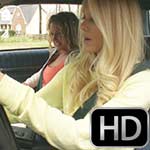 Brooke & Gem Heading to the Gym

They’re wanting to go do a little workout but their car won’t start.  Both girls give it a try but they just end up killing the battery.  Brooke gets out of the car to go call someone else for a ride as Gem is draining the battery all the way down.  I guess you could consider trying to start the Monte Carlo as a leg warm-up! 🙂

One thought on “Brooke & Gem Heading to the Gym”