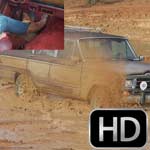 Gem has never gone muddin before, so this is all new to her.  She starts out doing some little figure 8’s in the mud and after a short while, Scarlet decides to hop in the passenger seat and ride shotgun as she guides Gem through the mini-lake of glop!  She doesn’t carry too much speed into it and after some splashing, the Jeep comes to a halt…the engine died.  Gem fires it back up and as soon as she presses the gas, that distinct noise of the wheels spinning tells everyone that she’s stuck!  Scarlet does a bit of coaching as they try to free the Jeep from the mud.