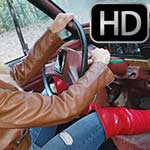 They’ve just got their boots put on in the back of the old bus and walk over to the Jeep to see if it’ll start. Brooke gets behind the wheel with her red over-the-knee boots, jeans and brown leather jacket. She turns the Jeep over more than a few times before it finally sputters and shows life of wanting to start. It sputters to life after another try or two but Brooke stabs at the gas instead of smoothly feathering it to warm it up; this results in the Jeep conking out again.
Back to the cranking and pumping again…

Brooke drains that battery way down and then switches seats with Jane, who really wasn’t given much of a fair shot at getting the Jeep started. I mean, come on, a dead battery…really?