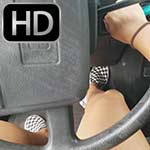 Some extra scenes from a custom of Brooke playing a girl looking to buy Jane’s Volvo she has for sale. The Volvo was Jane’s mom car (for real) and it was really for sale. Brooke tries getting it started at the parking lot used to sale the cars in some gray sneakers and then Jane tries to get it started in her black and white checkered Vans.