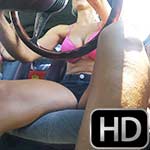 Brooke & Jane Bikini Babes Playing in the Laguna, 3 of 4

This part of the series is from a view that is just above the pedals looking up at the girls. So you see everything except the feet and pedals. Brooke cranking, revving, driving and stalling in the old Laguna while Jane films from her phone from the passenger side. When the Laguna gets hot, it keeps stalling and floods out and makes it hard to get started again. Brooke eventually drains the battery and they have to jump it off only to have the car keep stalling out and being hard to start again.

One thought on “Brooke & Jane Bikini Babes Playing in the Laguna, 3 of 4”